What the heck is kernel_task?

My relationship with kernel_task is quite old. I met this little guy back in 2015 when I started to use my MacBook with three external monitors. This was ok in cold months but when the air temperature around this MacBook started to get over about 22°, the computer became very slow. Actually so slow that it was no longer possible to work with it. Unplugging one random monitor solved this issue for me immediately.

I can remember that I also filed a bug report in the Apple bugtracker but unfortunately I lost the link and Apple replaced the bugtracker at all. In this bug report I also assumed that it may be the GPU that is causing this issue. Some internal sensors seem to get falsified somehow.

The following years, me and little kernel_task became friends. I met him every spring, summer and even on hot autumn days. He also made it on every new MacBook I purchased from 2017 to 2020 since I managed it to break their keyboards after exactly one year.

In this article I wrote about my keyboard issues and here I actually wrote about kernel_task the first time by recommending to get your MacBook rid from any dirt and dust inside the fan since this will give you power to withstand another two more degrees of temperature.

To be able to work with our computers on hot summer days, me and my co-workers had to put them on ice blocks. This immediately solved every thermal issue. 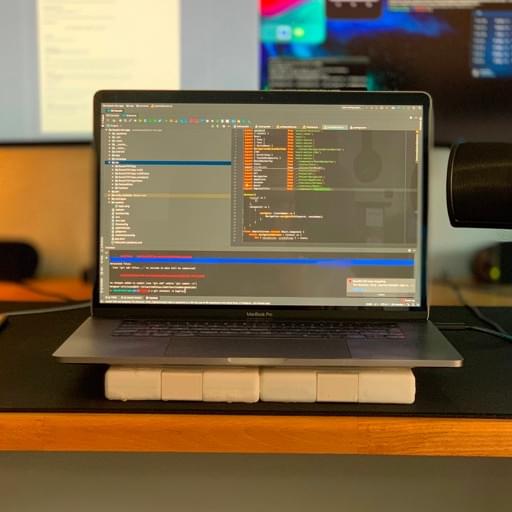 Photo This is how you can fix MacBook thermal issues

Then, in the early 2020, my friendship with kernel_task finally found an end. At this time I even tried to add a unneccessary powerful graphics card in the MacBook I had to buy because of my keyboard issues with the hope that a more powerful GPU may produce less heat since it may be faster or more effective in some way. This thought was totally wrong.

Also some other people figured out that it may help to charge the MacBook on one of the two thunderbolt ports located on the right side but unfortunately this was already my default behavior. For a short amount of time I also thought it may be that my charging dock is causing this issue on the late 2019 model since it only delivers 85w instead of 96 the MacBook theoretically requires.

This was also wrong. Charging my computer using the power supply that was shipped with the MacBook changed absolutely nothing and the statistics written by iStat Menus proof that my computer had enough power even when running on 85w.

It is so sad that you have to spend another 600€ to fix a computer that already cost 4000€ but yes: Since I bought this AMD Radeon RX 5700 and a Razer Core X to house it, my problems were gone. The internal GPU of my Radeon Pro 5500M now only consumes 6-10w instead of 20w. This seems to save the extra temperature and allow the MacBook to work properly.

I spent about four days using the eGPU now and hit some peaks that immediately caused a bad feeling before, but this time it all went well. I was even able to work with an absolute stable CPU frequency even when the fans were running on their limit. You can also see this in some of my iStat Menus data. Everything that is somehow related to the CPU looks more stable and reliable. 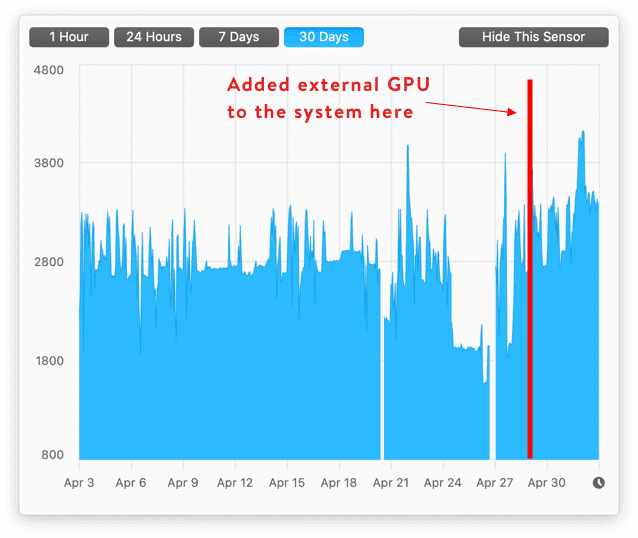 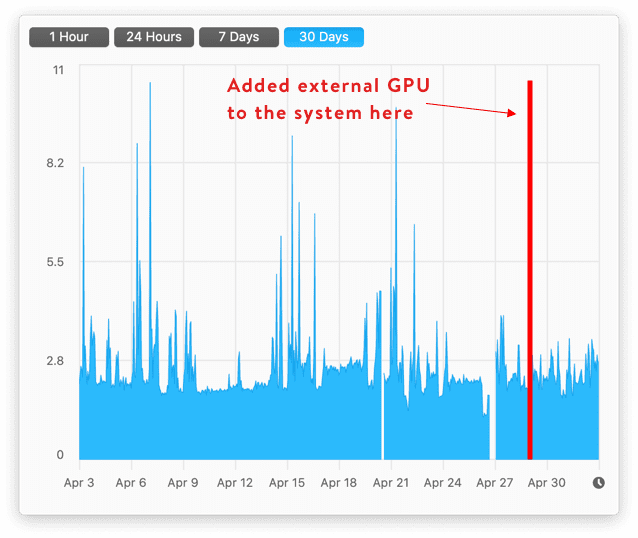 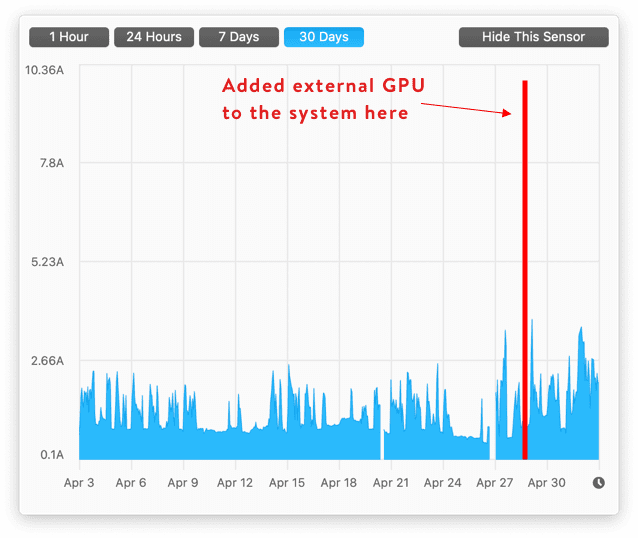 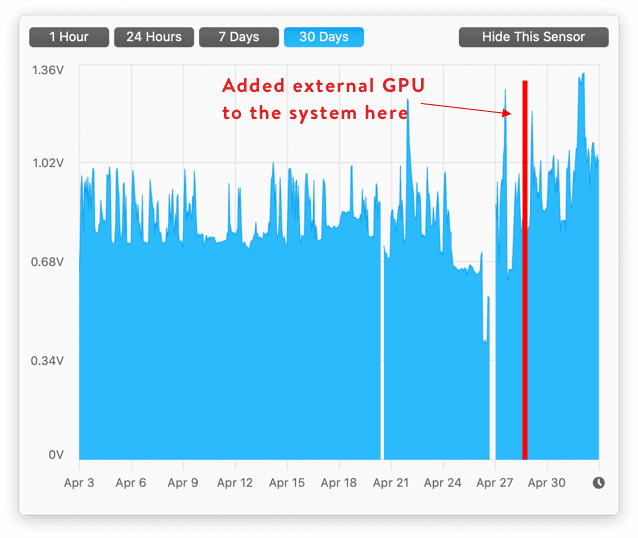 I hope that my positive feelings are not based on a big coincidence. Right now it feels very different and fun to use my computer. And I definitely challenged him since the eGPU update took place. The screenshots are based on the following hardware: MacBook Pro (16-inch, 2019) 2.3 GHz 8-Core Intel Core i9, 32 GB 2667 MHz DDR4, AMD Radeon Pro 5500M 4 GB, Intel UHD Graphics 630 1536 MB .

This is the printed version of: https://thomaskekeisen.de/en/blog/macbook-pro-thermal-issues-kernel-task