We visited the Hackathon Stuttgart 2016 during the last weekend - to be more concrete: from 4 to 6 november 2016. The goal of the event for each team is to realize a new idea within the time available. Of course, not only a good idea is required, you also need the ability to implement it accordingly. With some luck, you can win one of the four prizes from the categories "Best pitch", "Best idea" and "Favorite of the community". The sponsors also award additional prizes to teams that used provided technology.

The biggest sponsors in this year were Bosch, car2go, Kärcher, Leitz and logicline. Beside hosting solutions, the apis from Kärcher and car2go were very exciting. All machine data could be accessed and sometimes we were also able to write data. For example, we were able to write a text from the smartphone to the display in the car2go vehicle.

Stuttgart, we stay with you! The motto of our arrival

Idea pitch and our idea

We actually do not prepare for hackathons, so we arrived completely unprepared in this case and due to the traffic in Stuttgart unfortunately over an hour too late, too. At the Hackathon Stuttgart 2016 it is common for all projects and ideas to be defined in advance. I think this is a pity, because the final idea just grows while you are working on it. We would rather just have some time to run some tests with the provided apis to develop a possible idea at all.

Our final idea was initially called "Kärcher Game", later "KärcheRPG". It will be a 2d role play game with a multiplayer function for managing the Kärcher and car2go fleet. From the technical view, we had phaser.js, socket.io, and node.js in our focus. The first one of course, because I personally had a lot to do with phaser.js while I wrote this website and I wanted to expand my knowledge here even further. After all the teams had pitched their ideas, it was about 20:30 o'clock and after a short meal we started with the actual development.

The first night we already generated a lot of program code. It took some time until the map of our game and the connection to our node.js server were set up with socket.io. The biggest problems were - apart from the very unstable wireless network - actually the synchronization of the player positions when new players joined while the game was already running. We were able to fix that at 6:30 o'clock the next morning, so just before we went into our bed built of seat bags.

Screenshot We had not only programming our minds

Saturday started great. We woke up between 8:30 and 10:00 o'clock in our castle of seat bags, beer bottles and monitors, finally awakened by the noise of the arriving teams who had not slept at the events space. After a short breakfast, we quickly implemented the chat and started to write features for the pitch on sunday. We also had some meetings with Kärcher related to the interfaces we wanted to be implement to access data from the sweepers and water driers.

The rest of the day was a mix of fun and "finishing". At midnight, we had implemented everything we wanted to show in the pitch: our role-playing game for fleet management with the support of several players, a chat and the integration of the apis of Kärcher and car2go. In addition, the access to the data of the sweeper is blocked so that the door in the game to the room containing the sweeper can only be opened when two players press two different switches at the same time. 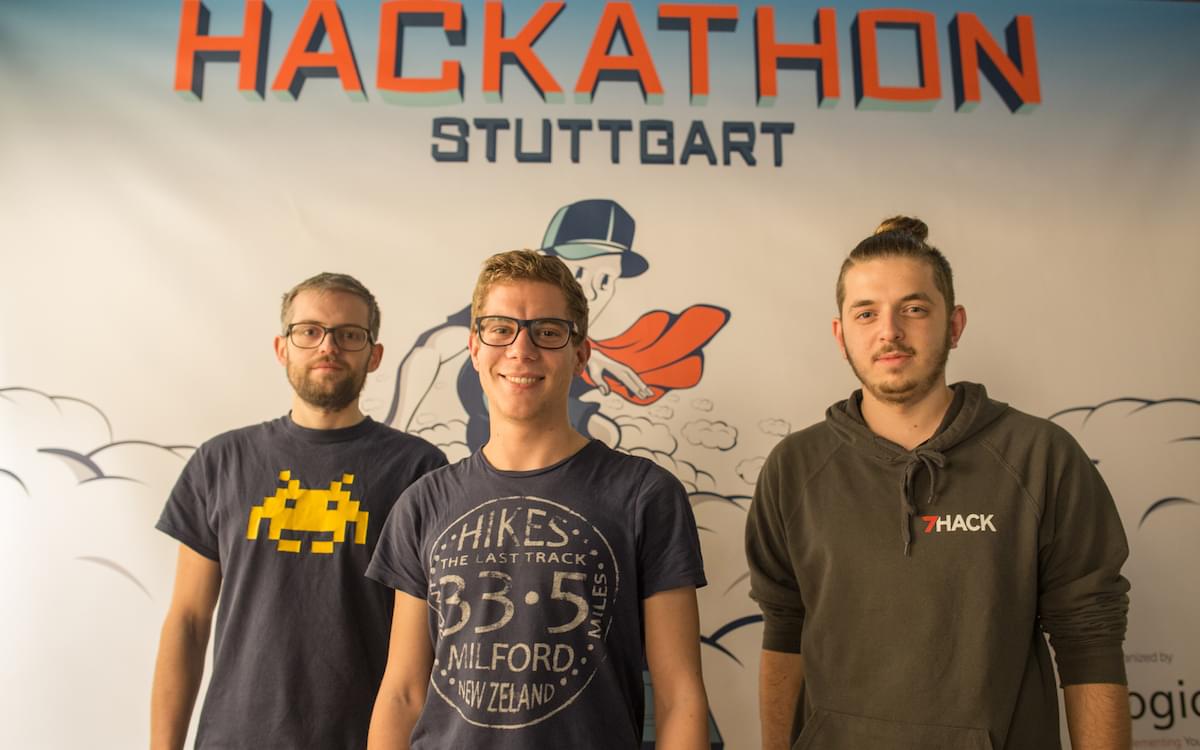 The night to sunday was a bit longer, because we were basically satisfied with what we had built the days before. So we slept from about 2:00 to 9:00 o'clock. The rest of the morning we spent with a breakfast, the fine-tuning of our application and as well with the development of our pitch. Until lunch we disassembled our workplace and made us ready for departure.

The pitches themselves were very exciting. A total of 19 teams were registered, one team unfortunately baled out. The ideas were broadly mixed. From the "Internet of Dogs" over a Kärcher sweeper used as controller for Super Mario Kart to a printer driver, which distributed a single print on several printers, everything was there. My personal favorites were actually the two projects I named first. Here is a small demonstration video of our project as well a one of "SuperMarioKehrt":

We had great fun and learned a lot about phaser.js and socket.io as well. And of course we met a lot of great people. The only frustrating thing was the very unstable wifi network. Here we lost far too much time with waiting. A stable Internet connection on a hackathon is essential.

That we won no prize is a pity, but for us at the Hackathon Stuttgart, tradition. So far, we have cleared prices at every Hackathon we participated, but not in Stuttgart. Unfortunately, I do not know on which position we were in the vote "favorite of the community". I would like to thank the team of logicline for the organization and look forward to see you again next year.

This is the printed version of: https://thomaskekeisen.de/en/blog/hackathon-stuttgart-2016